In a circular economy workshop for Wakefield Council and the third Sector funded via the Community Renewal Fund, on the 17 October 2022 Dr John Lever from the Department of Management at Huddersfield University involved participants in a series of activities to encourage greater understanding of circular economy. 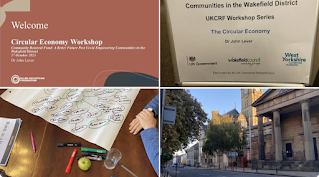 John asked participants to bring in an object or product that had the potential to be circular or symbolised circularity. This facilitated a great initial discussion. Following on from this, John gave a talk on key circular economy concepts and resource use statistics before asking participants to think about the health and well-being implications of moving towards a circular economy for their organisation and the wider ecosystem of which it is a part.
In the final 90-minute activity, participants were put into mixed organisational groups and asked to work through a series of questions to enable collaboration and the design of a new circular venture or activity. The results of this final activity stressed the importance of moving beyond linear thinking in organisation and building circular infrastructure that could better enable collaboration.
Posted by johnblevers at 14:45 No comments:
Email ThisBlogThis!Share to TwitterShare to FacebookShare to Pinterest

Earlier this week I read with interest an article in the Smithsonian Magazine about What Archaeology Tells Us About the Ancient History of Eating Kosher. This shed light on and made me reflect on debates about the origins of some of the oldest dietary practices and food assurance regulations we know.
The underpinning study found evidence that between 539 and 332 B.C (way past the time of Moses) Judeans weren’t following the laws of kashrut, a set of rules in the Torah (the Hebrew Bible) that outline foods that are fit for human consumption (i.e. kosher) and those that are non-kosher (i.e. unfit to eat). The researchers found that during this period Judeans consumed a lot of non-kosher fish (i.e. catfish, skate and shark) but that between 63 B.C. and 324 A.D. the remains of these scaleless fish (scales are the source of many prohibitions) had almost disappeared from ancient trash. A similar study conducted at two ancient Judean settlements found remains of pig bones, which is surprising as the flesh of swine is also strictly prohibited for Jews (and Muslims). This evidence suggests that kashrus dietary prohibitions came into force much later than many scholars assume, which adds weight to claims and mounting evidence that ancient Judeans weren’t strictly kosher
These insights took me back to a study of Food Ways & Daily Life in Medieval Anatolia, which draws on a range or sources, including archaeological evidence, to explore early Islamic food practices. In a discussion of the religious value of certain foods, the authors draw a distinction between pious asceticism (fasting, for example) and carnal instincts (consuming forbidden foods). However, in Medieval Anatolia their evidence suggests that reference to the Islamic dietary terms halal (lawful or permitted) and haram (forbidden) - which can be linked back to key verses in the Quran - were applied to particular servings of food (i.e. this plate of food is halal) rather than specific food categories. The general impression that emerges is that ordinary people in late Medieval Anatolia did not use the (at the time) ‘high-cultured categories’ of halal and haram to refer to categories of food and dietary practice in their everyday lives, as they did later, but to general patterns of behaviour.
These insights can be aligned with contemporary geographies of religious food practice, which fluctuate in significance across space, time and place, and often have greater or lesser degrees of importance to different cultural and religious groups.
Posted by johnblevers at 15:19 No comments:
Email ThisBlogThis!Share to TwitterShare to FacebookShare to Pinterest

As it unfolded, the #Covid-19 crisis drew attention to the task of moving the food system into a “safe” (within planetary boundaries) and (socially) “just” operating space that can provide sufficient resources to meet humanity’s needs without outstripping the planet’s environmental capacity to provide for these needs (Rockstrom et al., 2009; Raworth, 2017; Velenturf and Jopson 2019).
As the recent bush fires in Australia – which killed tens of thousands of farm animals and burnt innumerable crops – demonstrated, there are other dangerous ecological crises on the horizon. The UK food system is not immune from such crises and the countries we depend upon for food will be negatively affected in by these trends in the coming decades. We thus need to plan and develop local, circular and regenerative methods for growing and producing food if we are to make our food system more resilient to future shocks (Lang 2020; Steel 2020; Firbank et al. 2018; Lever et. al 2019).

Funded by the University of Huddersfield (alongside work conducted by academic partners from University of Leeds), this project aims to enhance the resilience of the local food system in West Yorkshire by bringing together a network of key stakeholders in and around Kirklees to; 1) understand the pressure points in food supply and demand during the #Covid19 crisis; 2) the solutions that emerged, and; 3) and the innovations required to enhance the resilience of the local food economy going forward. Please get in touch if you can contribute!
Posted by johnblevers at 18:02 No comments:
Email ThisBlogThis!Share to TwitterShare to FacebookShare to Pinterest

Unsafe and unjust: food system dynamics in a time of crisis

Before the Covid-19 crisis, many of us took the food on our plates for granted. But as we quickly found out, the UK’s food system is ‘stretched, open to disruption and far from resilient’.

As the crisis unfolded, the UK media highlighted the impact of panic buying in supermarkets on key workers and on society’s most vulnerable. It is easy to blame consumers. Yet their reaction was largely a consequence of ‘just in time’ strategies and the embodied belief that we should be able to buy whatever we want whenever we want it. With children home from school, and eating out all but prohibited, this is understandable. But it also illustrates how ‘just-in-time’ supply chains come under strain with even the smallest shift in demand, and how the most vulnerable suffer most from the inequities of the system.

Since the latter half of the 20th century, the rich world has become accustomed to an abundance of food choice. Local food systems around the world have been swept away by the industrialisation of agriculture, and the UK now imports almost 50% of its food. While food has been traded internationally for millennia, the scale and geographical complexity of primary food production is now vast. Buttressed by rapidly evolving technologies that indicate where and when crops are ready to harvest around the globe, ‘just-in-time’ production is brilliantly efficient and profitable, yet it is also incredibly fragile and dependent on logistics.

Coovid-19 is shaking these foundations. While countries in Asia have discussed whether produce should be held back for domestic markets, in the UK supplies of fruit and vegetables are threatened by lockdown and border closures that may restrict the recruitment of migrant workers.

The need to move food production and consumption into a safe and just operating space within planetary boundaries is widely recognised as one of the grand challenges of the 21 century. In 2019, the EAT-Lancet Commission’s report 'Food in the Anthropocene' concluded that the way the food system operates poses an existential threat.

Covid-19 has brought this threat into clear focus. Monocultural production and genetic homogeneity in agriculture has long been identified as a problem. But with investment practices eating steadily into the remaining primary forests and smallholder farms worldwide, Covid-19 has drawn attention to global agriculture's role advancing global health pandemics.

There are other dangerous ecological crises on the horizon, as the recent bush fires in Australia (which killed tens of thousands of farm animals and burnt innumerable crops) demonstrate. We are not immune from ecosystems stress, and the countries we depend on upon for food will be negatively affected by such crises in the coming decades. As Tim Lang suggests, we need to plan and develop strategies to protect and regenerate land for growing food quickly if we are to make our food system more resilient to these shocks.

By 2050, the vast majority of the world’s population will reside in cities, and city governments around the world are already leading the way developing circular, regenerative food systems that can work within planetary boundaries. While there is no one size fits all, policy and theory are increasingly focussed on the development of networked urban-rural interdependencies as a means of developing innovative place-based food systems.

Five hundred years ago in Utopia (1512), Thomas More anticipated a network of self-sufficient cities surrounded by﻿ suburban food growing sites. Covid-19 is pushing cities in new directions. Milan has a post pandemic ‘plan zero’ involving new ways of planting trees to enhance future social distancing measures, while Amsterdam has announced it will be the first city to fully adopt Raworth’s economic model to enable a just and safe future. Staying “Safe” (within planetary boundaries) and “Just” (to address a range of inequities) requires that we produce food in new, innovate and more resilient ways. As Covid-19 has shown, this is no longer a utopian vision.
Posted by johnblevers at 12:22 No comments:
Email ThisBlogThis!Share to TwitterShare to FacebookShare to Pinterest

In recent years, the ‘migration crisis’ in Europe has raised concerns about addressing the social and economic needs of the growing numbers of refugees arriving in the UK from countries such as Syria. The BFURE project is interested not in the costs incurred by supporting refugees, but in the skills and knowledge refugees have when they arrive in the UK, and how these skills can be harnessed to support and enable refugees to contribute to the UK economy and further social integration.

The project will explore refugees' knowledge and skills through a series of ‘Pop-up Skills Shops/Clinics’ and ‘Skill-Gap Workshops’ with local authorities, non-government agencies and refugees across West Yorkshire during 2019-2020.

Get in touch for more information.
Posted by johnblevers at 18:03 No comments:
Email ThisBlogThis!Share to TwitterShare to FacebookShare to Pinterest
Older Posts Home
Subscribe to: Posts (Atom)