Where have all the great sociologists gone?

Two days ago I visited the magnificent Cutlers Hall in Sheffield to witness the equally impressive Loïc Wacquant lead a conference and give a public lecture. During the course of the day, Wacquant witnessed a group of urban sociologists and social scientists present a fascinating set of papers paying homage to the conceptual finesse brought together in his latest book: The Two Faces of the Ghetto. As co-organiser and co-chair John Flint noted, it was a privilege to be there. 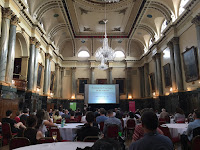 I first witnessed Wacquant speak as a PhD student 10 years ago in Bristol, where he set about unraveling the policy assumptions of those working in urban policy at the height on New Labour's foray into urban regeneration. At this weeks 'Rethinking urban inequality' event, organised by Ryan Powell, Wacquant was equally impressive. An intense, charismatic speaker of voluminous intellect and sociological passion, Wacquant is larger than life and in full flow an experience to behold.

At the start of the day Loic seemed unusually subdued by his long journey from California, via Paris, but as was pointed out at the start of the pubic lecture, 5pm Wacquant is very a different beast to morning Wacquant. However, the talks soon had him intrigued, perhaps epitomised by his response and feedback to Isabella Clough Marinaro's excellent talk on 'The Informal Face of the Ghetto: Ambiguities of Power and Ethnicity in Italy’s Roma Camps'. The array of papers was impressive and demonstrated the range of applications of Wacquant's conceptual apparatus, which as he has pointed out on numerous occasions, should be seen as an empirically testable model.

For me personally the day illustrated all that is good and bad about sociology. In his feedback to the papers at the end of the day, Loic took issue, controversially for some, with the final two presenters, perhaps, or so it seemed to me, because of their 'overly involved' and 'polemic' styles. In response to Adam Elliott-Cooper's intriguing talk on 'The Struggle That Cannot be Named: Violence, Space and Black Resistance in Post-Duggan Britain', he suggested that by focusing on single issues activists often miss the chance for wider engagement. Similarly, in response to Matt Clement's talk, and his criticism of Elliot's suggestion that many young people today have no idea what a trade union is, Wacquant argued that the current unrest in France linked to trade union activity is not as important as Clement claimed.

For me this illustrated the changing nature of sociology and sociological knowledge. As Kilminster (2004) has argued, the development of sociological theory can be seen as part of a changing set of attitudes towards different forms of knowledge – as evident in the rise of move involved forms of identity politics, for example – and to the evolution of the knowledge process more generally. These changes can in turn be linked, he argues, to increasing levels of functional democratization and with the need for individuals to be more reflexive and sophisticated within more complex networks of social and political interdependence. This in turn raises the intriguing issue, which I have been working on with Ryan Powell for some time, of the appropriate level of involvement for sociologists working on and engaging with the contemporary issues raised by Wacquant's work. While older sociologists often have a tendency to be more detached, younger sociologists increasingly have a tendency to be more involved.

This takes us back to where we started. What makes Loic Wacquant a sociological great, in my opinion, is that he allows us to the view the present by focussing on the past and a long-term sociological perspective that combines conceptual and empirical rigour in ways that overcome the superficial temptations of ‘presentism’ evident in much contemporary sociology (Savage 2014). As Wacquant illustrated in a discussion spanning four centuries - from the 16th century Jewish ghetto in Venice to the 20th black ghetto in the US - the ghetto is a vertical and horizontal space constructed for trade, which at once protects and stigmatises its inhabitants. Next time Loic Wacquant is in town put the date in your diary.
Posted by johnblevers at 09:54 No comments:
Email ThisBlogThis!Share to TwitterShare to FacebookShare to Pinterest
Newer Posts Older Posts Home
Subscribe to: Posts (Atom)